I’m not sure what it is with me and these classic SEGA titles, but here we are looking at another fan-favourite from back in the 16-bit days and, again, it’s another title that I never really got on with: Shinobi III.

Just like Super Hang-On and some of the others, I could appreciate Shinobi and why everyone loved it so much – but I could never get in to it. My favourite Shinobi game is still, to this day, Shinobi on the Game Gear. The use of different shinobis – all with unique skills really appealed to me.

The taxing difficulty and tricky jumping sections on Shinobi III did not appeal to me. But I can understand why it did to others… even more today than ever.

Oooh you have the 3D-ness 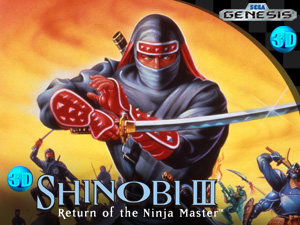 I feel like I’m repeating myself with these reviews, but once again I was impressed by the 3D visuals that M2 has managed to put onto Shinobi III – or rather 3D Shinobi III: Return of the Ninja Master (to give its full name).

There are several moments where the graphics look like you are playing a whole new game – because of the way the foreground and backdrops are used.

Nothing much more to say on this, the 3D visuals look great, I didn’t notice any glitches and the 3D didn’t impede any of the jumping sections or collisions, like it has done in some of the other 3D games. 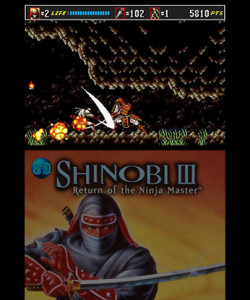 3D Shinobi features several of the same additional features seen in other 3D Classics, but actually fewer than most. But this isn’t necessarily a bad thing, because what is on offer is there to enhance and improve the experience for gamers, without breaking/ruining the original game totally.

Shinobi has always been considered to be a challenging title and two of the additional features make it much easier for gamers to progress and enjoy the entire game without so much frustration.

One of these features, which I am personally thankful for is the State Save option. So if you do get to an area of a level you are finding quite taxing, you can save and should you inevitably die, you can quickly reload and try again.

The other addition is the Round Select – essentially a level select – so should gamers still find the game too hard to play through even with the state save, or just really want to play a specific level the game caters to you. 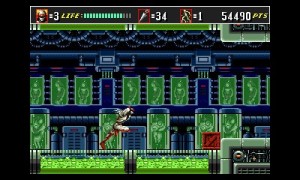 The Expert Ninja mode, while adding a challenge, is also really fun. As you can probably guess, I’m not great at this game, but I played through a good chunk of the game in Expert Ninja mode and porbably enjoyed it more for it.

Gameplay for the AGES 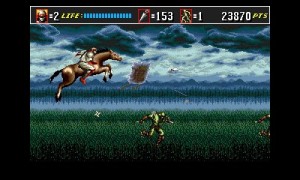 This is the area where I can appreciate Shinobi III more than ever. The game has held up amazingly well over time in terms of solid, enjoyable (if difficult), action-packed gameplay.

As I mentioned, back when it was originally released, I didn’t care so much for Shinobi III, but I found myself hooked on the game. I think maybe it’s because there are so few games these days that play like these old side-scrolling action-platformers.

The closest match is the obvious – Shinobi 3D (the modern Shinobi game released specifically on the 3DS) and then maybe Mark of the Ninja on XBLA – but other than those, I can’t really think of a modern game that is similar in style.

My point being, that because of the lack of comparable titles out there now, Shinobi III feels completely fresh in such a stale market, even though the game is 20 years old!!

There are, however, some niggles with Shinobi III that derive from its core gameplay and difficulty. As I mentioned, Shinobi is meant to be a challenging game, but I think there is a very fine distinction between a hard game and an unfair game. 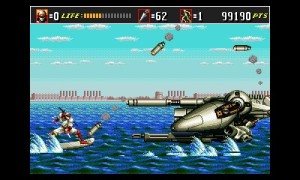 There are times in the game where you literally cannot avoid getting hit, so basically the game punishes you for no reason and it’s basically impossible to finish certain areas without getting hit. Also, there are several times where you get hit by enemies from off-screen. It doesn’t happen all the time, but when it does it is infuriating.

Especially one time where you are having to follow an elevator up, with the screen constantly moving, and need to do a tricky jump only to be hit by an off-screen enemy who sends you plummeting to your death.

There is also a gripe with the actual controls in the game. The double jump is an essential maneuver, but I found that, for some reason, the ‘simple’ double tap of the jump button didn’t always work – and it tended to be in the situations where it was most essential – leading me to relive some childhood memories and curse at the screen: “I pressed the smegging jump button! JUMP DAMMIT!!”

And the part of the problem is that these are elements that you tended to find in retro titles. Some might like how taxing it is, but as I said – they tend to feel unfair and can ruin the enjoyment. 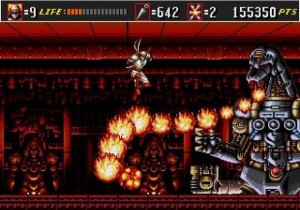 3D Shinobi III holds up really well after all these years, the gameplay actually feels kind of fresh and offers gamers an enjoyable challenge.

However, there are still times when the difficulty seems a tad unfair, with a few cheap deaths and sections where you can’t avoid getting hit.

Now, I was on the verge of giving this game a slightly higher score, but the grievance I found with the double jump, became so incredibly frustrating, especially in the frantic moments when you needed it, it actually hurt my overall enjoyment of the game. I’m not sure if there is an update M2/SEGA could do to help with this, but it’s something that does need to be fixed.

However, that’s not to say I didn’t have fun. If anything I enjoyed this game much more than when I played back in the day. And the additional features will suit both newcomers and highly experienced Shinobi players.

The website for the SEGA 3D Classics Collection is now open