Believe it or not, there was a time when video game companies did more than post screenshots or gameplay videos to Facebook to promote a video game. They didn’t always rely on “countdown” websites, either. Sometimes, companies like SEGA would do some pretty batshit crazy stuff to stir interest in a new game.

Beginning today, we’re going to run a series of articles highlighting the absolute craziest viral marketing campaigns SEGA used throughout its history. To kick things off, let’s look at Seaman, the weird virtual pet simulator released on the Dreamcast and how SEGA marketed it to Western audiences.

Released on Aug. 8, 2000, and developed by Vivarium, the game puts you as the caregiver for a tiny fish with a human head. It’s your job to nurture it to adulthood and eventually teach Seaman to talk. It’s one of the strangest games on the Dreamcast, which is really saying a lot, but it’s also one of the most fun and original games I’ve ever played. After awhile, you’ll develop a relationship with Seaman, and back in the day, I often found myself looking forward to getting home from work, popping  Seaman in my Dreamcast and seeing what the old fella was up to. 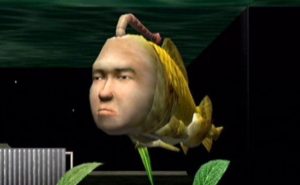 Believe it or not, Yoot Saito, the  game’s lead designer, actually captured his likeness to use as the face of Seaman. So if you’ve always wondered why he looked a bit weird, now you know why.

But that’s not where things went really weird. You see, Saito had, and still maintains, a personal website at www.yoot.com. Today, it’s used as his personal blog and also to promote his latest video game, but back in 2000, it was used as something altogether different – a viral marketing website for Seaman. Fortunately for us, the Internet Archive exists, so we can look back at this website’s history and dig up its strange, storied past.

So let’s travel back to the year 2000, when Seaman was released in North America. If you click on the June 19 entry, you’ll be met with an “under construction” page letting you know they’re redesigning the website, but making sure to urge you to buy Yoot’s Tower, Saito’s latest creation at the time. But a few months later, on Aug. 15 to be precise, we find our goldmine. 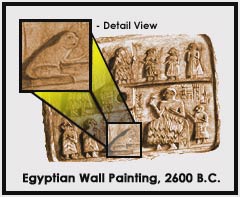 The website has been transformed into the official website for American Science Journal Online. The first paragraph of the page tells us everything we need to know: “Amid the desert heat of Egypt and the river waters of the Nile Delta, an American-led team begins the search for the elusive Seaman. Finding the legendary creature may lend clues and help raise the veil of mystery that has surrounded the Seaman for over 4,500 years.”

Reading further, you’ll learn of Professor Jean Paul Gassé, who on April 15, 1932, was part of a French team investigating the Nile River’s ecosystem. During his research, he first discovered Seaman, whose scientific name is Habibi de Kimo. Months later, Gassé is able to capture some Seaman eggs and returns to Paris to begin a breeding experiment. But disaster strikes, and all of the Seaman died. Without a living specimen, mainstream science rebuffs Gassé’s thesis, which was published nearly a year after his initial discovery.

Now mocked and ridiculed by his peers, Gassé goes into hiding and no one hears from him again, but clues to the professor’s research still pops up in Southeast Asia. About 60 years pass without so much a peep about Seaman until July 22, 1997, when a child captures a living Seaman in Alexandria, Egypt. This discovery sparks a chain reaction of events that leads to a Japanese researcher successfully hatching Seaman eggs in captivity. In September, Seaman is now being presented at aquariums in Japan.

That pretty much explains the timeline of how events unfolded, but if you take a moment to peruse the rest of the website, you’ll get a lot of background information on Gassé’s research, including clues that link Seaman to the mysterious Egyptian and Mayan pyramids. If you’re a fan of the game, you certainly should read up on the site because it really fleshes out the story behind the creature and makes the overall game much more enjoyable.

I remember reading Yoot’s website when the Seaman site was being actively updated, and it was a lot of fun. According to the Wayback Machine, it appears that the Seaman portion of the site was taken down in February 2001 and was then used to promote Sega Swirl. However, thanks to the Internet Archive, we can still enjoy this magnificent piece of marketing. So be sure to take a look through the gallery, which includes screens of every webpage the Seaman site had to offer.

I hope you enjoyed our first part in this series of crazy SEGA marketing, and if you have any ideas or suggestions, please send them to seganerds@gmail.com!

Yoot Saito teases Seaman news – could it be Seaman 3? Or maybe another SEGA PC port?