Desert Breaker was released in 1992 and developed on the System 18 hardware. To date, very little else is known about the game, and even Galloping Ghost themselves aren’t sure if this is a prototype, or an official release of the title.

Desert Breaker is very similar to Capcom’s 1990 release of Mercs. Galloping Ghosts is the only recorded arcade to currently have this game. If you’re in the area, it may be worth taking a trip there to see this and other rare arcade titles they have! 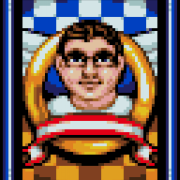