The Elysian Shadows’ Kickstarter campaign kicked off yesterday, and it looks like their growing fanbase is kinda excited to help get this game made, as they have already raised nearly $34,000 of their $150,000 goal. 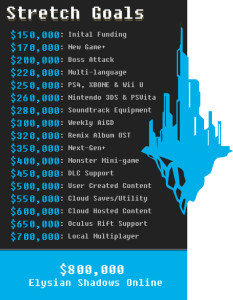 Elysian Shadows is a 2D RPG currently slated for the SEGA Dreamcast (WaterMelon is publishing), OUYA, Windows, OS X, Linux and Android. According to the campaign’s description, the team, “fuse aspects of 16-bit classical RPGs with a highly stylized, modern vision by using dynamic lighting, physics and audio engines along with swapping 2D and 3D perspectives.

“Our goal is to create the “next-generation” of the 2D RPG in terms of gameplay, graphics and audio,” the team wrote. “We want to reinvent and revitalize the aging genre for a new generation of platforms, while still remaining true to the 16-bit charm of the SNES and Genesis classics that we all grew up loving.”

The development team appeared on this week’s Nerdcast to talk more about their Kickstarter campaign, but up until now, they’ve kept their stretch goal tiers close to their vest.

There are 17 stretch goals in all, beginning with a New Game+ mode for $175,000 and culminating with the team turning the game into an online game if they can reach $800,000. Mixed within are goals for next-gen consoles and handhelds, DLC support, Oculus Rift support and user created content, to name a few.

For a $15 pledge, you’ll receive a digital version of the game upon release for OUYA, Windows, Mac OSX, Linux or Android, as well as other goodies like a digital wallpaper and instruction manual.

I opted for the $60 pledge, which includes a physical copy of the game on Dreamcast, Windows, Max or Linux. It also includes a strategy guide, a one-year subscription to Indie Game Magazine, a digital soundtrack and several other rewards.

All Elysian Shadows copies that are purchased during the Kickstarter campaign will also receive a Legend of Zelda-inspired Master Sword, which is super badass.

The game’s Kickstarter ends on Aug. 31, and you can view the campaign here.