Earlier in the week we reported that Atlus has released a Japanese demo of their upcoming Vanillaware-developed, Norse mythology-themed action RPG, Odin Sphere: Leifthrasir. We couldn’t wait to try the game, so this evening we managed to sneak our way onto the Japanese PSN Store and scurry away with 423 mysterious megabytes from the Land of the Rising Sun.

How does the demo compare to the original PS2 version? What can we expect from the full game? And what in the name of holy Asgard is a Leifthrasir? Let’s get to it! 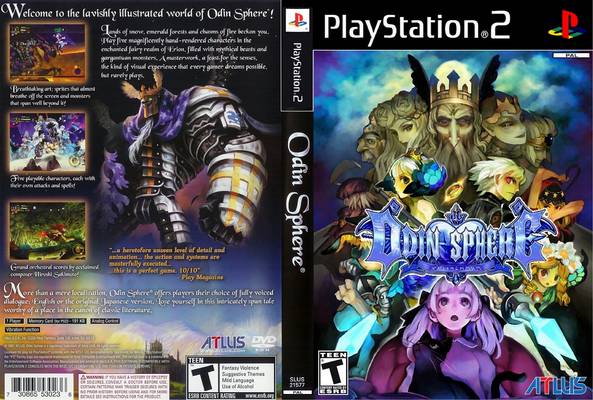 I should state before getting too deep into this preview that I’m writing from the perspective of a gamer who’s never played the original Odin Sphere. Though I often coveted that salaciously adorned DVD case and the glorious blue-backed disc within, the Playstation 2 iteration of OS was a game that eluded me to the last.

Happily for me (and many other late-to-the-party slugs, I’m sure) Atlus has seen fit to remaster and re-release this 2-D wonder child on the Playstation 4. Thor bless you, Atlus.

When initially firing up the Odin Sphere demo, we’re treated to the playful artwork that has become synonymous with Vanillaware games via titles like Dragon’s Crown and Muramasa. Luckily, characters in Odin Sphere are free of the often-ridiculous anatomical hyperbole seen in Dragon’s Crown, resulting in a style that’s more closely comparable to Muramasa. I’m sure that some will love the look of OS, and some will hate it. For me, it’s unoffensive and charming, with a balanced assimilation of Japanese and classic, Norse styling.

The graphics are fairly wonderful, with incredible animation, rich colors, and decadent lighting. World-building is taken to another level, as in many of Vanillaware’s games, which leaves the player feeling fully submerged in a kind of lucid dreamscape. Sprites are fluidly animated, and resolution is crisp and clean. Whether showcasing a stage full of falling snowflakes and happy snowmen, or a lush and verdant coniferous hillside, Odin Sphere’s art designers have nailed the aesthetic. Whatever the environment, things look gorgeous.

Music is atmospheric, melancholy, and moody, which suits the game well. Ancient sounding instruments strum sleepily in lull moments, and when the action picks up so too do the tunes. General sound engineering is spot on, with swords, shields, and the pitter-patter of nimble warrior feet sounding exactly as they should. Voice work in the demo is entirely Japanese but it seems to be of high caliber, and while some of the voice work can get a bit repetitive during frantic swordplay, there’s a quality here that keeps things from annoying.

For fans of classic video games it seems there are enough nostalgic tropes here to tickle even the most jaded gamer. Not only are we able to smash pots to reveal treasures, but we’re also able to smash treasure chests, crystal formations, and snowmen! Yes, this world is rife with treasures patiently waiting for the everyday objects under which they lay to be smashed. And smash them we must, for our OCD decrees it so.

We’re also seeing a veritable cornucopia of consumable potions, fruits, and colorful liquids. Unfortunately, our feeble western brains can’t comprehend mystical, Japanese writing, so we’re left to guess at each item’s particular use. But here familiar tropes save us yet again, as blue potions activate ice magic, red potions activate fire magic, and- you get the idea. Interestingly, there’s a thing that looks like a mango that replenishes health. Not sure that mangos were ever a Viking hoard staple, but it’s cool. We can get into mangos. 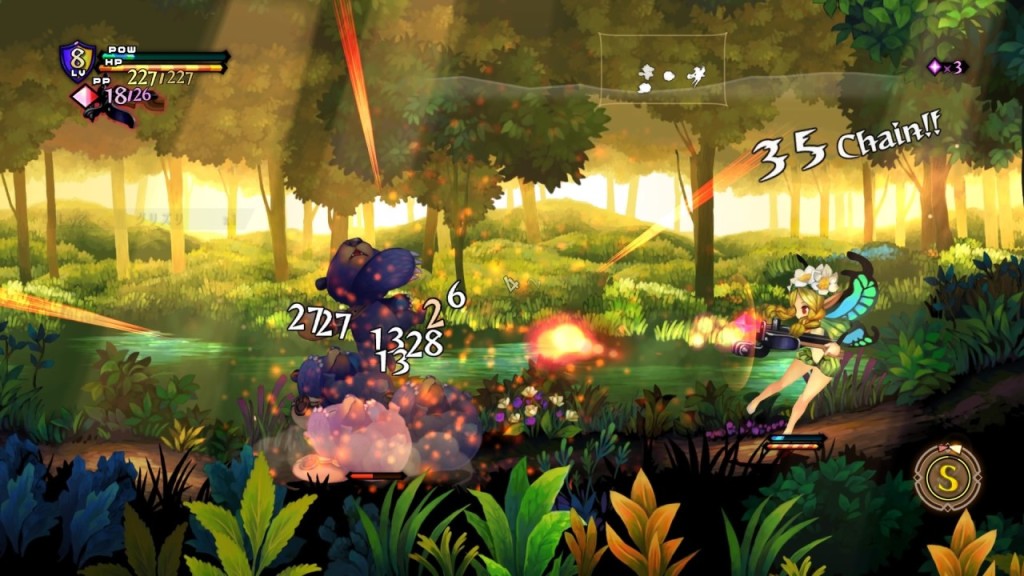 Promising to add to the game’s depth is the ability for items to be combined to generate new items. Though we’re not treated to much of a sample of this mechanic in the demo, there’s ample evidence that this alchemy will be an important and interesting pursuit in the final game.

Stages are laid out in what appears to be a linear pattern, with each sub-section acting to fulfill a gameplay mechanic. The richly detailed stages afford players challenging mini-bosses, swarms of sword-fodder, or multi-level vistas for simple exploration. The game intelligently allows for breaks in the action, with some stages acting as a means of stocking up on gear, replenishing health before a boss fight, or interacting with well-fleshed NPCs.

Combat is incredibly fluid and fast. Chain-driven gameplay results in massive combos that may begin on the ground and end high in the sky. Lesser enemies are slashed, juggled, impaled, and slammed to the ground with slashes that seem weighty and satisfying. A dodge button acts to quickly spring the character from one enemy to another, keeping the combo alive and the action furious. Activating spells, potions, and items causes the real-time slashfest to pause momentarily, allowing the player to choose the best tool for the job and to tactically employ the best means of enemy disposal.

Slaughtering enemies yields experience points that bolster the character’s stats. Typical to the RPG genre, as player level and gear improves so too does the level of competition. Segments can get quite hectic, with enemies slashing the player both from the ground and from above. Luckily, characters are given the ability of temporary flight, so even lofty aerial baddies peppering us with arrows are not long for this world.

The two boss fights that we’ve seen have been rather stunning. The massive sprites take up much of the screen, imbuing the enemies with an impressiveness that’s not been seen since the daunting days of Ridley and Mother Brain. 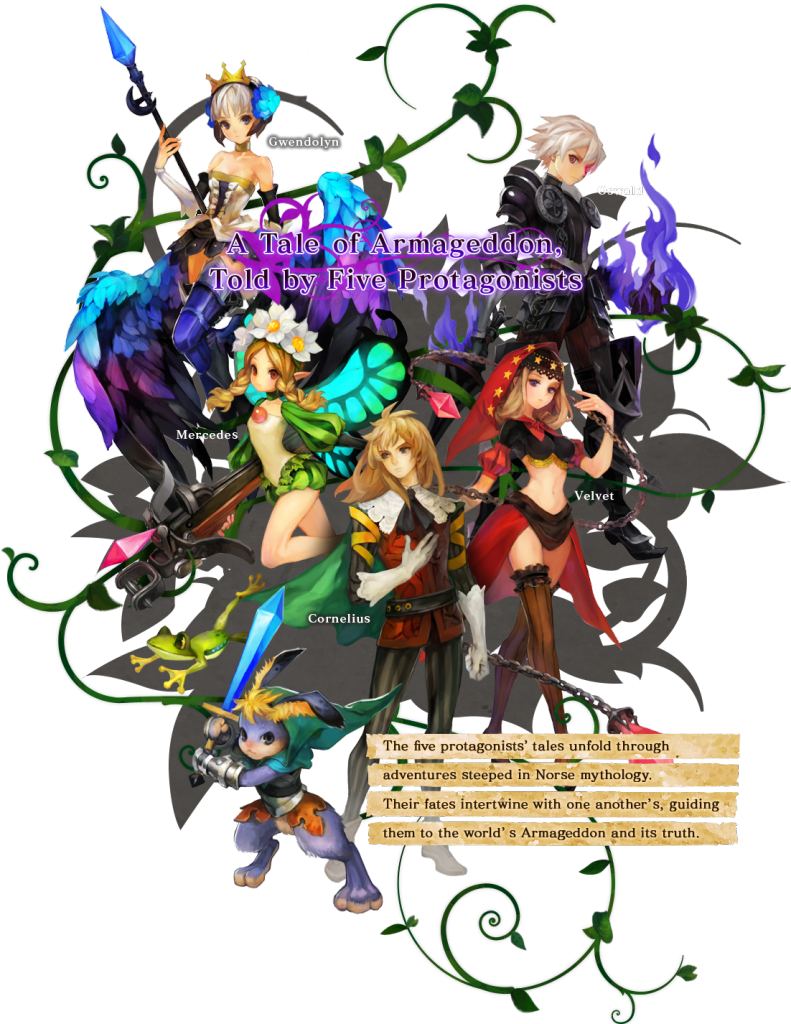 Character selection is simply massive, and each offers their own unique playstyle. Similar to what we saw in Dragon’s Crown, the character that the player chooses can have an astounding impact on the way the game is played. We’re seeing a sort of character class system in OS, with enough variety to keep things fresh and satisfy every taste. The hulking warrior is here with his heavy slashes and slightly cumbrous movement, balanced on the other end of the spectrum by the spritely magician who flits through the air flinging lightning bolts across the land.

More varied than the typical hack-and-slash, not only are characters different in movement speed and available HP, but they’re also deeply varied in their very attack mechanics. It’s not enough to simply have a hammer in place of a sword. Vanillaware has equipped chain-wielding characters with a lock-on mechanic, others having the ability to turn invisible, and still others having ranged weapons with limited ammunition.

It all combines to create a game that is far more fleshed than the typical hack-and-slash. Tactics, angle of attack, defense posture, and other variables all play a role in determining whether the player will be successful or continually visit the GAME OVER screen. There’s strategy here, and there’s a reason to keep playing that’s so often lacking in this type of game.

Additionally incentivizing diversity in character preference is the fact that each character has their own unique storyline. This helps ensure longevity of play and a real desire to keep delving into the world of Odin Sphere, as only by playing through the game with each character will one fully experience the story.

And experience it we must. After our brief time with the Odin Sphere demo, we’re left wanting more. If the demo is anything to go by, OS seems to be the type of video game we live for; an intensely immersive experience that totally buys into its own mythology, it’s an experience that will take us away to another world and charm us with its exceptional personality. We can’t wait to get our hands on the full version, and rue the fact that we missed this game the first time around. 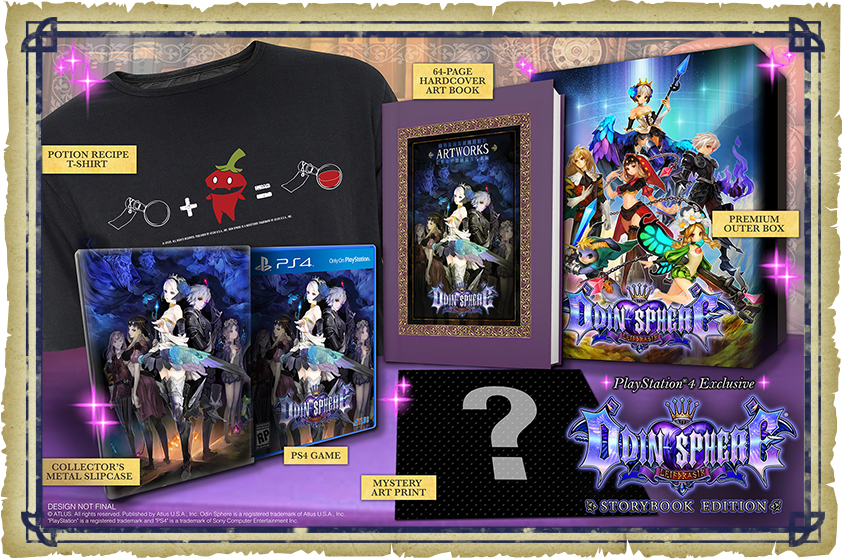 Luckily, we won’t have to wait long. Atlus has announced very recently that the game will release in North America on July 7th. That’s great news. But further sweetening the deal is the announcement of a pair of special editions, something Atlus has been doing well for a number of years.

Playstation 4 users can spring for the super-deluxe Storybook Edition or the decidedly less premium Limited-Time Bonus Edition, which is also available to Playstation 3 and Playstation Vita gamers.

Be sure to check back for a full review of the game, unboxing videos of the Storybook Edition, and more coverage of Odin Sphere: Leifthrasir in the coming months.

Crunchyroll will simulcast PERSONA5 the Animation -THE DAY BREAKERS tomorrow