Great puzzle vs system fun with funny animations. Ideal to challenge others and have a good time with friends.

October 25th, what a better way to celebrate Puyo Puyo’s Anniversary than doing a Review for the 1st title on a SEGA console (even though the original Oct 15th 1991 release was on the MSX & the Fami***Disk System)?

Puyo Puyo on the Japanese Mega Drive is based on the SEGA System C2 Arcade version (which is the actual 1st release of this title for a SEGA platform). This version differs from its MSX counterpart by focusing more on VS combat (MSX single campaign doesn’t have a CPU competing against the player) which was the feature that made the game series a huge success in japan, players were eager to challenge others for the puzzle title supremacy. 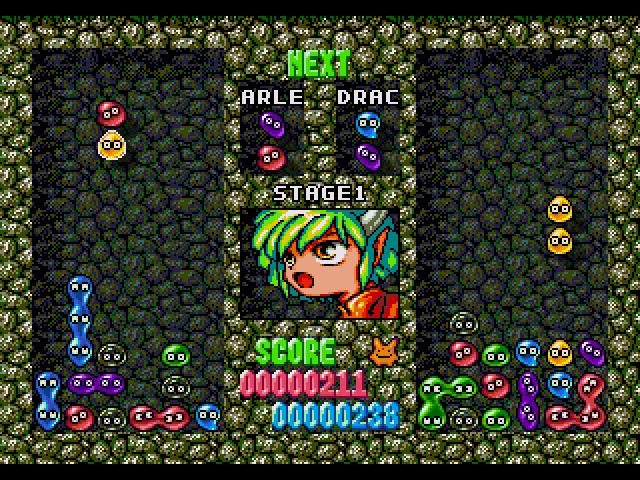 The gameplay system may sound pretty easy at first but strategy plays a big role while challenging an opponent or solving the 1 player game battle campaign. The premise is simple: Puyos (a slime type creature from Compile’s own Madaou Monogatari RPG Dungeon Crawler series) are being stocked from the upper part of the screen to the bottom, you lose if you get your part of the screen stocked by these, but you are able to eliminate them continuously If you stock 4 of the same color (Green, yellow, purple, blue, and red, while transparent are for punishments).

Now the strategy of the game consists in eliminating as much colored puyos at the same time, the more you eliminate on a chain reaction the more your score rises and the more transparent puyos you throw at your opponent (whether 2P or CPU), which cannot be combined with any other color and can only be removed if the opponent connects a 4 color chain near them. That’s why stacking up more possible colors for a massive chain reaction is more efficient than just eliminating a simple set of 4 on the go.

The match victory is declared when the opponent screen is fully stocked or has no possibility to go on due to an excessive amount of punishment transparent puyos. 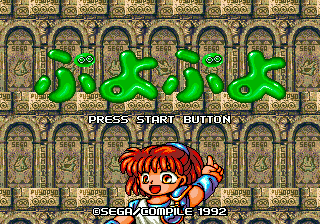 What Puyo Puyo offers that makes it a puzzle game on its own against titles like Tetris is (back in the day, of course, we’re reviewing this title setting it on its historical context), as we said before, is its VS feature, it’s fun to challenge another, but also its appealing visuals and animations (featuring Madaou Monogatari characters, now pretty popular among Puyo fans). It helps the game to achieve being fun, like watching your opponent’s characters  make faces or feel sad, a thing that didn’t happen on old Tetris back in the day. Sadly most of these characters wouldn’t resonate with general western audiences since they don’t know them that much, but for the Japanese market they have a lot of appeal. Though, the Mega Drive version does a good job on porting the arcade graphics in a pretty way for the console version.

However, a part where the game lacks is in the audio, while the Puyo Puyo theme is catchy and gets everyone in a good mood it’s almost the only track you’ll hear in the whole game (game over BMG and Satan final round are among the different ones). The voice audios were compressed too much due to the amount of space on the cartridge, a thing that does not happen in the PC Engine version that also has the pre-battle animation scenes this version lacks.

As for the controls this game has a great standard, you connect your puyos with a simple quick response, which is a basic for the puzzle game.

It is a game to master. Playing the simple way will get you defeated quickly, contrary to the American localized version with Dr. Robotnik, this game is harder, so you better get used to the piling up strategy for maximum opponent damage.

Puyo Puyo was COMPILE’s (long gone as such, now somehow inherited on Compile Heart) most successful creation. Puyo Puyo series have been published for 24 years, leaving a legacy of over 40 titles, on more than 30 platforms, with at least 2 titles per SEGA console since the Mega Drive era. Its particular fun gameplay features have made this game last for so long, so it is interesting to play its roots once in a while. In fact, Puyo Puyo Fever on the Dreamcast was the last title to be officially published by SEGA on any of their consoles. Since 1998 SEGA holds the full rights for the IP, its latest titles include Puyo Puyo Tetris and Puyo Puyo Quest for Arcade and Mobile in Japan.

If you wish to know more about Puyo Puyo, Compile, and its founder / series creator, Niitani Masamitsu, you can check out our retrospective on the matter.

Or if you wish to read our review by PJ Randall for the localized version, Dr. Robotnik’s Mean Bean Machine, you can read it here.