The original Sonic the Hedgehog, aside from being one of the most important titles in the history of the game industry, is also one of the most important games to me personally. Moderately lengthed story short, the title that saved the Genesis and established Sega as an industry leader is largely responsible for kindling my lifelong love of video games. It is therefore also at fault for the thousands of hours and dollars I’ve subsequently wasted on games. Blast that hedgehog.

Mawkish anecdote aside, Sonic the Hedgehog is actually not one of my favorite video games. When juxtaposed with its sequels, Sonic the Hedgehog 2 and the combined Sonic the Hedgehog 3 & Knuckles (which I consider one game), it develops a pallid complexion. The level design is largely unconducive to high speed hijinks and a fairly high amount of precision platforming is featured. Not that these are necessarily bad things, but Sonic Team didn’t truly hit its stride regarding level design until the second entry. (My opinion of Sonic CD is documented and less favorable than Sonic the Hedgehog.)

In the years spanning the original game’s release and the rapidly approaching 22nd anniversary of the eponymous character, game, and franchise, Sonic the Hedgehog has seen release on more platforms than I can recall. This has become such a common occurrence that each new lackluster port is no longer even noteworthy. At this point, it might be simpler and faster to list the platforms that Sonic the Hedgehog hasn’t been released on. So why bother to review the latest release on iOS and Android?

Because it was developed by Christian “Taxman” Whitehead and Simon “Stealth” Thomley. Mr. Whitehead of the fantastic Sonic CD port from a couple years ago, and Mr. Thomley who was the first of the Sonic scene to patch a playable Knuckles fully into Sonic the Hedgehog. With those track records, there’s no way their combined efforts could fail at a new port of the classic that started it all, right?

Indeed. The latest iteration of Sonic the Hedgehog is fabulously reconditioned and includes a boatload of bonuses that demonstrate the love and care of its handlers. I cannot muster the cynicism to ferret further complaints with this stellar port, so here are the only ones I have: the touch-screen controls, and the fact that it’s only been released on iOS and Android. Let’s tackle those in order.

Honestly, the controls are about as good as touch-screen controls can be, though the simplicity of the control scheme can take some credit. Sonic only needs four directions and one button to do everything he does, and that definitely helps make things manageable. That said, some parts of the game are definitely more difficult due to the lack of precision, and I found the special stages almost impossible with the virtual d-pad. I’m aware that there are physical controller solutions for both iOS and Android, but was unable to test any of them. And come on, using a physical controller on a smartphone or other mobile device is a level of nerdery beyond even myself.

The control issue could be resolved easily, by simply releasing this port on any other platform. Thankfully, the release of Mr. Whitehead’s port of Sonic CD on PSN, XBLA, and Steam is reassuring. However, there’s been no official announcement from Sega, and Whitehead for his part is staying mum. I will say that if this port of Sonic the Hedgehog is not released on anything but mobile devices, it will be a crime and a shame. Perhaps even a crying shame.

How do I love this port? Let me count the ways. A complete remaster of the original soundtrack, with every beat sounding so fresh and so clean. Full widescreen support, and a rock-solid frame rate that doesn’t quit. Slick menus that again demonstrate all the tender loving care stuffed into every crevice. Time attack mode. Spin dash. Unlockable, playable Tails and Knuckles, including brand-new routes designed specifically for these characters. A debug mode that lets you use shields from Sonic the Hedgehog 3, place items that were cut from the game, transform into Super Sonic, Tails, and Knuckles, and more. I needn’t go on. 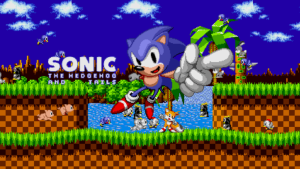 A sequel to the Sonic: Mega Drive comic is launching later this year