It’s been about a month or so since we first got a sniff of SEGA Forever and earlier today, we reported that SEGA had officially announced their new service with an awesome trailer. In its press release, SEGA had set a date of June 22nd (tomorrow) for SEGA Forever to be launched in the US and Europe (with titles being available in Asia late evening June 21st).

But it looks as though the service’s launch titles, are available in the GooglePlay store already! It’s definitely in the UK, because I have access to them, and some parts of America and South America – though not everywhere it seems, as some of our team can’t see them still.

Now, we assumed by all the details we’d gathered over the weeks and even with SEGA’s official announcement, that SEGA Forever was going to be a single app, which provided the means to download and play classic SEGA titles, but now we’re not so sure.

When you type ‘SEGA Forever’ into the search, a lot of SEGA and SEGA-related titles appear and that includes individual apps for the launch titles announced for SEGA Forever, namely: Sonic 1, Phantasy Star II, Altered Beast, Kid Chameleon and Comix Zone (Note: actually I had to search separately for Comix Zone, but it’s there!). 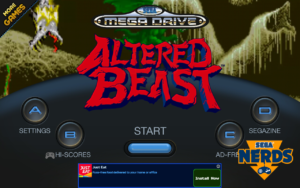 Now, these aren’t just the standard apps, when you boot up the games, you are greeted with the SEGA Forever info box and a new menu screen, from which you launch the game. You have the option to sign up to a SEGA-zine, which appears to be some form of newsletter, offering artwork, hints and articles about “your favourite SEGA games.”

You can also click on the ad-free button, which takes you through to a payment screen to unlock the game for £1.99. Though, it looks like this doesn’t totally stop *all* adverts, as the information box specifies that you will still see adverts for SEGA games – that might sound a little ‘off’, but I get SEGA’s approach and in some ways, as a SEGA fan, I don’t mind seeing the odd advert about other SEGA games on the service. 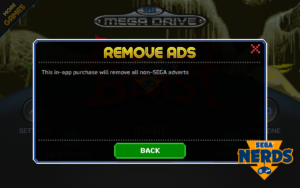 Speaking more about the ads, on the menus you see basic ads for other apps or service, like JustEat and you also get pop-ups for games, which tend to appear as you initially load the app (before the menu screen really pops up) or just before you start the game; so far, in game there are no ads. I saw the Crazy Taxi Gazillionaire advert about 4 or 5 times in my quick play on the different games, although, humorously I did also see one for Super Mario Run – well if Nintendo is paying for the advert, I guess SEGA can finally benefit from Mario’s popularity!

On the menu screen, you also have the ability to connect to Facebook and annoy the crap out of your friends by sending them invites. Yes, I’m afraid the days of game-invites on social media are not over. But I think we’d all rather see an invite to a game like Streets of Rage, over Candy Crush! 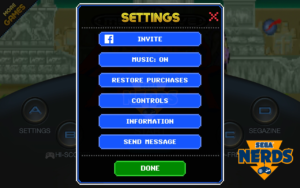 You also have some other standard menu options, such as seeing the game credits and high-scores – but you can also send a message… I’m not entirely sure who you are sending the message to though – as it wasn’t clear. I’m going to go ahead and assume it’s just a message to SEGA, but it doesn’t actually say.

Check out the gallery below for more information and go ahead and check out the GooglePlay store to see if you can grab these games a day early!

SEGA announced as a partner to Apple’s new arcade service