The combination of atmosphere, limited items, and a terrifying predator makes the game a must buy for fans of the genre.

Ripley: How do we kill it Ash? There’s gotta be a way of killing it. How? How do we do it?

Playing through dozens of survival horror games makes one realize that many of these games lack the key ingredient that’s right in the genre’s name: survival. Alien: Isolation succeeds in that regard, by bringing back the “survival” in “survival horror”.

You star as Amanda Ripley, daughter of Alien‘s Ellen Ripley, who goes off on a mission to find out what has happened to her missing mother. Amanda arrives at Sevastopol to find that the space station has been damaged and all communication has been lost. Amanda eventually runs into a man named Axel, who warns that a monster is running a-muck in the space station.

Without a doubt, the Alien is the most intriguing part of the game. If I were to compare it to another similar monster, think of Nemesis from Resident Evil 3, but on steroids. The Alien’s AI is simply remarkable; Any slight movement can cause the Alien to discover you and impale you in a gruesome fashion.

You can hear it’s scream in distance, and you slowly become paranoid that it might be nearby. As the music changed tone, I slowly peeked around the corner and saw its tail dragging across the floor, searching for its next prey. You don’t want to start running for the hills to your next objective since the slightest bit of noise will cause the Alien to run in your direction. If you have the PlayStation camera, you can use the camera’s microphone to increase the challenge since it can pick up any noise within its parameters. If your mom comes into your room and yells that she’s made hot pockets, you’ll know who to blame when the Alien haves you for lunch. 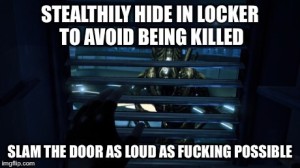 The only thing you can do when the Alien is in the vicinity is to hide and distract; you can’t kill him. You can, however, find various parts throughout the game that you can use to build different grenades, noisemakers, med kits, and more. Tossing a noisemaker at the Alien will cause it (or whoever you’re trying to run away from) to look in that direction which will give you the time to escape. The parts that you do find are extremely limited, so its important that you use them sparingly and only in emergencies.

There is a reason why Alien: Isolation received a BAFTA for Audio Achievement; Alien: Isolation’s soundtrack is an integral part in building the mood. Like the original Alien movie, the soundtrack and its environment creates a tense and immersive experience. The folks over at Creative Assembly wanted to create a completely different experience from Alien: Colonial Marines. Instead of the non-stop action of Aliens, they went for a much slower pace like the first movie. From the shadows and lighting effects, to the sounds of something mysterious moving in the vents, Creative Assembly’s creation demands the player to be on their toes.

If there was one area that needed improvement it would be Alien: Isolation’s character development. Despite the beautiful soundtrack and environment, the characters in the game do not get enough time to actually make you care about them. While the logs on the various computers throughout Sevastopol give some background to the space station, the characters that you encounter outside of Amanda seem disposable and you don’t really feel any sense of empathy when they kick the bucket.

Even with that tiny issue, the game accomplishes what many survival horror games have trouble accomplishing. The combination of atmosphere, limited items, and a terrifying predator makes the game a must buy for fans of the genre.

Creative Assembly will make an appearance at E3