While some fans were excited about being given the option to create their own Mobian characters in Sonic Forces, à la deviantART, others blew a gasket over why Sonic Team would introduce a concept proven to be successful in other games, such as Dragon Ball Xenoverse. And no sooner had SEGA streamed the Custom Hero trailer on YouTube last week than writer Warren Graff tweeted it with the caption, “Just a game I wrote, no big deal,” setting off a firestorm of doubtful tweets such as the following, in no particular order: 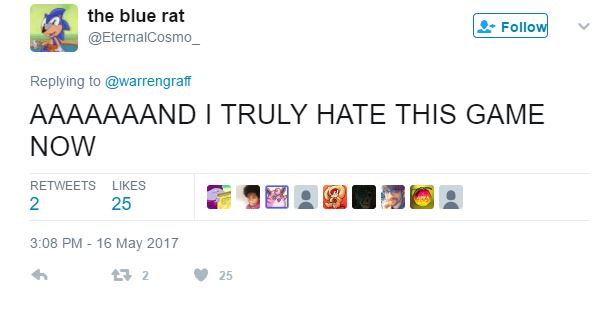 Fans complaining over a new gameplay mechanic and the writing techniques of a recurrent story writer ushers in the second phase of the most infamous video game conspiracy theory in the history of the franchise: the Sonic Cycle.

The Sonic Cycle first popped up on the NeoGAF forums on April 7th, 2008, when fans speculated that Sonic Unleashed, as soon as the first set of images and details came to light, would suck based on the quality of its predecessors, among them Sonic ’06. Actually, the Sonic Cycle originated from the X Cycle, a viral concept that details a gamer’s mood swings brought upon by the anticipation of a new game and/or console. The X Cycle is used to satirize fandoms and video games as a whole, but the Sonic Cycle seems to be the running theme of the concept because hardcore Sonic fans claim that the quality of Sonic games have drowned in the fecal puddle beneath an outhouse in the slums of Mumbai since Sonic ’06, if not earlier. Unleashed received mixed reviews, but it still fulfilled every phase of the Sonic Cycle to the letter because not everyone fell in love with “I Was a Teenage Werehog”; in other words, the night stages. 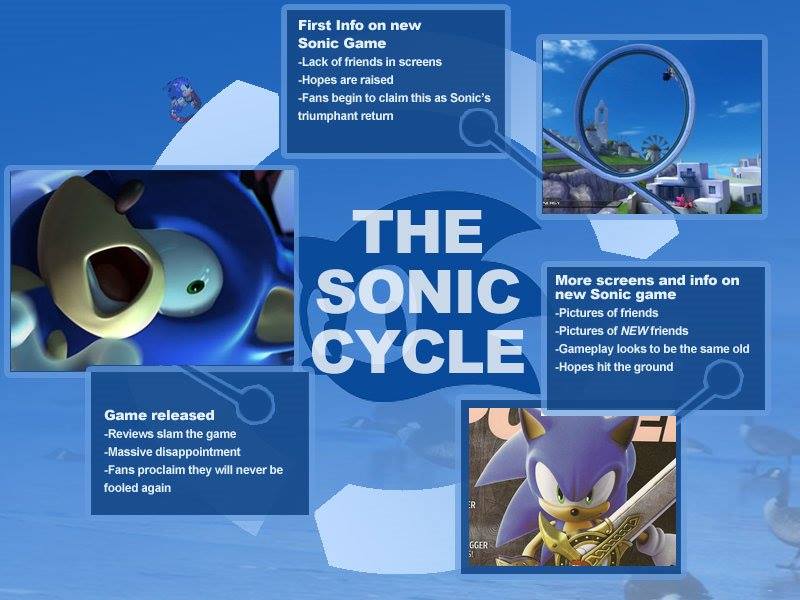 Following Unleased, Sonic and the Black Knight and Sonic Free Riders fell victim to the Sonic Cycle due to poor motion-control schematics on the Wii and Xbox 360’s Kinect, respectively. The storylines of both titles were great, but I just can’t stand the notion of seeing static images of the characters in lieu of CGI cutscenes, let alone swaying my hips in front of a broken motion-sensing camera.

The one game that broke the vicious Sonic Cycle was Sonic Colors, thanks to the introduction of Wisp power-ups, a new voice cast (save for the charming and incomparable Mike Pollock as Doctor Eggman), candy-eyed graphics, and gorgeous level design. Suddenly, fans were happy that they could trust Sonic Team to make great Sonic games by their standards once again. Sonic Generations received great praise as well, ushering in the new Sonic Cycle that listed positive traits of a new Sonic game instead of negative ones. 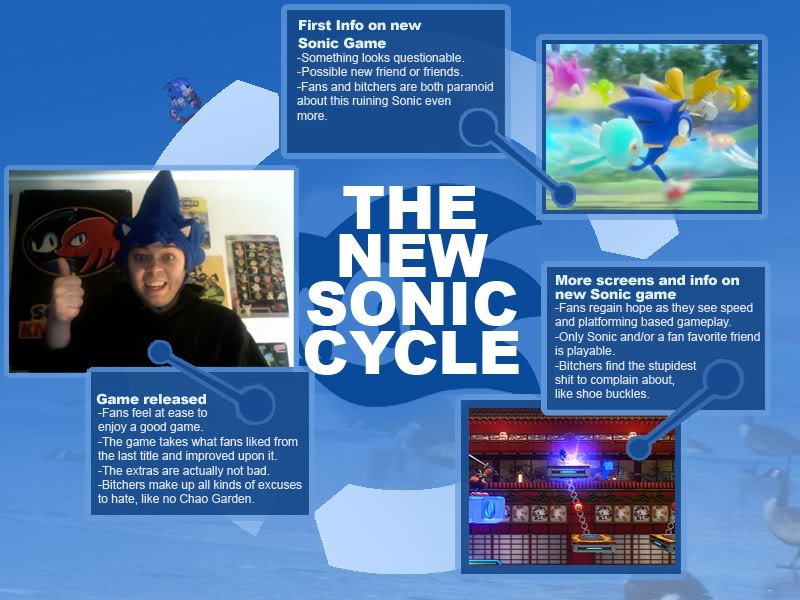 In 2014, Sonic Boom was announced for the Wii U and the Nintendo 3DS, setting the old Sonic Cycle back into motion due to changes in character designs, especially with Knuckles, whose brawn appeared to be more dominant than his brain thanks to steroid use. Rise of Lyric (Wii U) opened a Pandora’s Box of negative criticism from both critics and fans because it fulfilled the prophecy of the Sonic Cycle all the way through–poor graphics, slow frame rate, terribly-written dialogue (“An ambush with ice cream?” Really, Tails?), grade-F humor, and Chaos knows how many glitches (Knuckles’ infinity jump, anyone?).

Now we’re in 2017, and Sonic Forces is showing promise so far–Classic Sonic is back, the graphics are crystal clear, the frame rate flows much quicker, and players get to create their own characters for the first time. But, nevertheless, fans are complaining about the latter.

So, to save everyone the grief of having to choose between a negative Sonic Cycle and a positive one for Sonic Forces, I married the two into one new Sonic Cycle to make things fair for the entire fanbase. 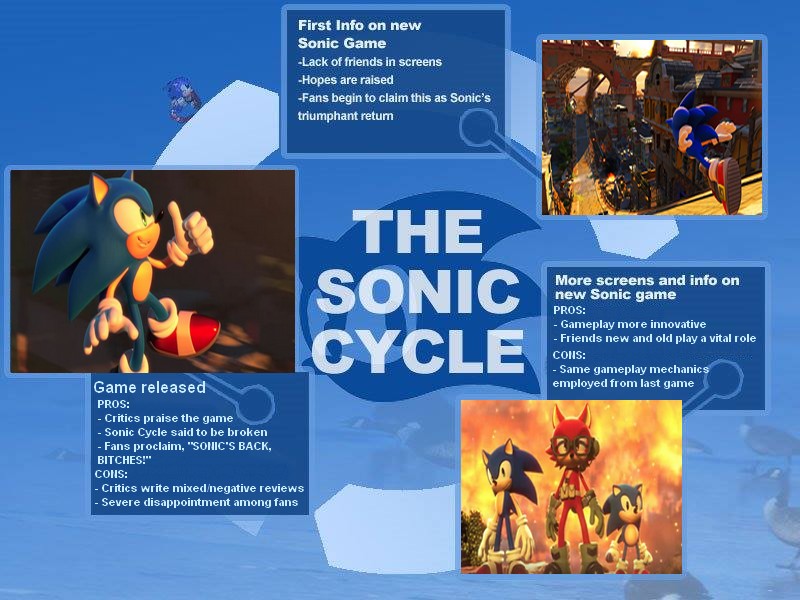 Sonic Forces is about six months away from hitting the shelves and digital stores, so no one knows exactly how the game is going to turn out until the day it’s released. As you can see, there are more pros in this edition of the Sonic Cycle than there are cons because, while there are certain things about Forces that concern us, such as the possibility of Tails being written off as either deceased or MIA, and that our custom characters will not come out the same way as we drew them for deviantART, I believe that Sonic Forces will be a great game, assuming there’s a compelling storyline, strong dialogue, supportive cast of characters aside from our custom counterparts, and challenging levels.

We got six months until Sonic Forces‘ release day, so we all gotta be patient with Sonic Team on this one. Keep in mind, they took four years to make it as good as possible.

Cristina Alexander has been an avid fan of Sonic the Hedgehog since 2003. Her favorites include "Sonic Adventure 2," "Sonic Heroes," "Sonic Advance 3," "Shadow the Hedgehog," "Sonic Riders," "Sonic Unleashed," and "Sonic Colors." Her favorite video game franchises outside of Sonic include Kingdom Hearts, Pokémon, and Just Dance. She graduated from Florida Atlantic University with a Bachelor of Arts in Multimedia Journalism in 2018.